In spite of the soaring temperatures a group of dedicated villagers came along to Abbeydore Village Hall on Saturday 6th July to give it an overdue clean and spruce up.

The local spider and woodlouse populations were soon in a state of shock and disarray as an army of dusters, mops and improvised spiderweb removers (a feather duster taped to the end of an extendable paint roller pole) were brandished in a flurry of cleaning, the likes of which have seldom been seen! Windows were cleaned and shone and floors were scrubbed and polished. 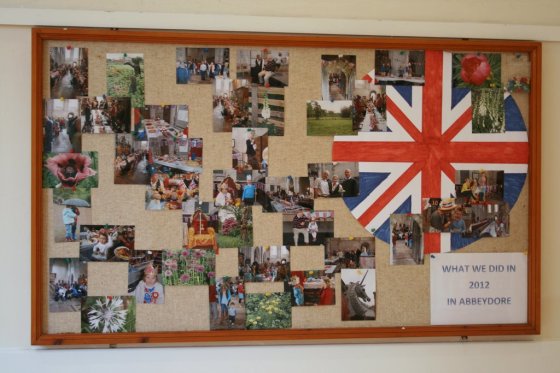 The kitchen was scrubbed, scoured and sorted. Cups, saucers and cutlery were washed, polished and put away in their proper place. Cleaning materials were placed out of the reach of children (and the smaller members of the hall committee) and the vacuum cleaner was brought out of retirement to give the entrance hall carpet a thorough going over.

Finally the storeroom was tidied, old unclaimed clothes put in a charity bag and the three large boxes of empty wine bottles dropped into the recycle bin. The table tennis table was resurrected along with the table football game (that nobody knew we had).  A large whiteboard and several cork noticeboards were uncovered and the Maypole was put safely in the corner (after being dropped on my ankle, causing substantial bruising).

A huge THANK YOU to everyone who took part.  The hall now looks amazing and hopefully, over the coming weeks, you will see the fruits of your labour as other things fall into place. Many things still need to be done, including a gardening session so we will be asking for volunteers again soon. But in the meantime, please support us by buying your tickets for the Dore Summer Dance so that we can raise more money for the hall and also for Dore Community Transport. 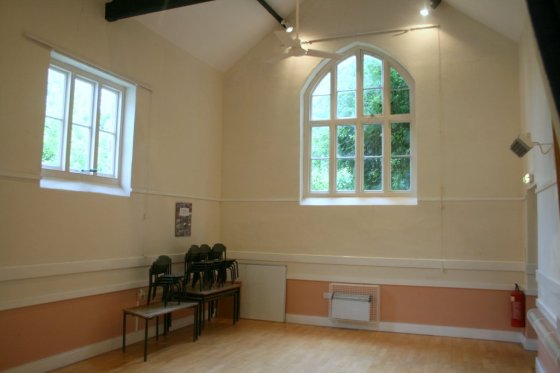 51.969835 -2.899874
Abbeydore Women’s Guild meet at the village hall on the 1st Thursday of the month, in the afternoons in the winter and evenings in summer.
Our “Walk on the Wild Side” on Ewyas Harold Common in late May certainly lived up to its name!  In the morning there was a hailstorm and the wind blew, but come the afternoon the weather improved (well, mostly!) and we were fortunate to have Dilys and Ian Hart to be our guides.  All of us saw parts of the common we had never seen before and we were thrilled to see the rare pearl bordered fritillary butterflies and orange tipped butterflies and we heard (and sometimes saw) chiff-chaffs, redstarts, willow warblers and yellow hammers.  It was such a rewarding day, and afterwards we returned to the village hall for tea.

We met in Dore Abbey for our June meeting and were guided round the abbey by the very knowledgeable Linda Cecil who was able to place the history of the abbey in the context of English and French history.  Here too we were shown items that we hadn’t known were there, including the wall painting of the skeleton!  After our fascinating tour we repaired to the village hall for tea. (this is getting to be quite a habit!…)

On July 4th we will be having our annual garden party – details from Anne Ponting on 240583.

There has been a toddler group at the Village Hall for as long as people can remember.  Taking place on a Friday morning between 10am and 12pm it offered a chance for Mums and their pre-school age children to get together and make friends.  Whilst the children played with the myriad of toys that have been collected over the years, the Mums could sit and chat over a coffee knowing that their little ones were in a safe environment and having fun.  Each week a different Mum would be in charge of setting up, making the drinks and returning the key at the end.  It’s the place that I first turned to when I moved in to the area with my 3 year old, and where both she and I made some lasting friendships.

Sadly, at the end of this school term it looks like Abbeytots may be no more. Attendance has dwindled, in spite of there being lots of young families in the area, and it seems as if there is nobody able to take on the group and keep it going.

It really wouldn’t take that much work as the toys are already in place, the kitchen and kettle are ready and the sandpit and ride-ons are just waiting for a new generation of toddlers to play with them.  The hall will be refreshed after the clean-up on 6th July, and there are moves afoot to improve the windows and heating to make it a cosier place to be.

If anyone is willing to try and kickstart Abbeytots when the schools go back in September, please let us know and we will give you all the support that we can. It would be a real shame if this longstanding group disappeared and people were forced to travel out of the area to attend other groups. This is what the Village Hall is there for, let’s use it!

Here are the first few companies and people that I would like to thank for helping with the Dore Summer Dance. Because of their support and generosity I can confirm that the dance will go ahead, and we have booked the marquee and hog roast.

Healing For All Therapies

However, we still need more help and more sponsors so that we can raise lots of money for Dore Community Transport and the village hall. So if you are a local company please get in touch, or if you know someone who can help then please ask them. I can be contacted on abbeydorehall@gmail.com or (01981) 241352. 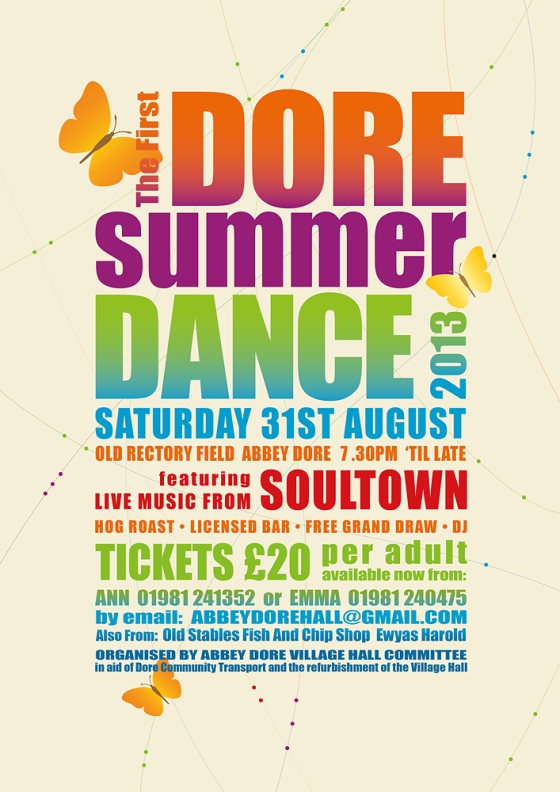 Our next project is an ambitious one, one that has not been tried in Abbeydore before, but one which could easily become an annual event and bring the community together at a fun evening to raise money for local groups and charities.

Introducing the Dore Summer Dance on 31st August in Old Rectory Field, 7.30 ’til late – in aid of Dore Community Transport and the refurbishment of the Village Hall. With a live band and singer, a hog roast, a grand draw and raffle and licensed bar it should be a great night and one that will hopefully raise lots of money for the above groups.

However, to make this work we need sponsors and donations, both locally and from further afield in Herefordshire. Marquees and bands cost money and whilst we want to offer the best that we can, their hire cuts into the money that we can raise and puts up the ticket price. We would be grateful for any offer of help, however big or small, and have a full range of options available. Please contact us at abbeydorehall@gmail.com or call Ann on (01981) 241352 for further details.

Sadly, if we can’t get enough sponsors we won’t be able to go ahead with the event which would be a great shame, so please support this great community event and help us raise lots of money for some great causes.

Approximately 12 months ago this is what we were doing in the Abbey, all organised by the Village Hall Committee. It was a fabulous day and the community came together in an extraordinary way. I don’t think that any of us who were there will forget it. 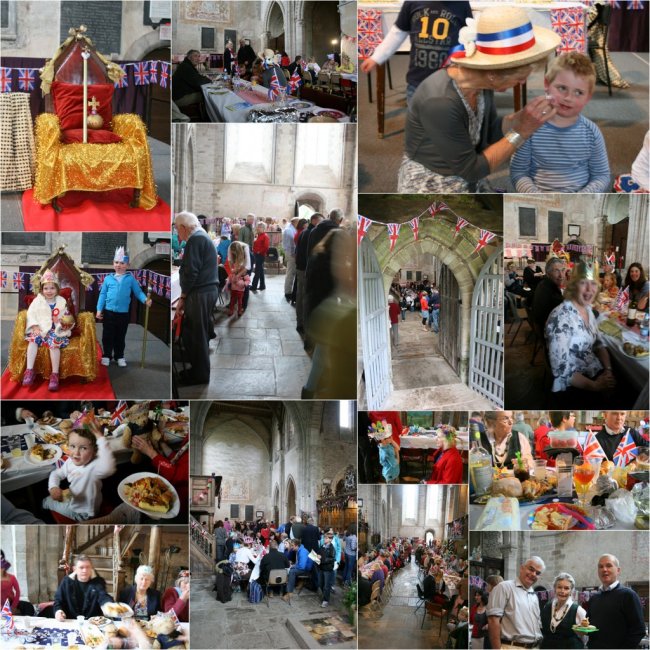 Let’s hope we can all get together soon for more fun and frolics.